Afternoon tea after a big Christmas lunch requires a special treat or two to keep the adults happy while the kids play with their new toys.  Now’s the time to create another ‘Wow!’ moment as you whip out your very own hand-made Christmas Fruit Mince Pies!

This recipe is easy to make in the days leading up to Christmas and will cement your place  in family folklore!

In medieval times, this pastry was called a "chewette" and contained chopped meat or liver, boiled eggs, ginger, dried fruit and other sweet ingredients. Thank goodness we don't include the meat and boiled eggs today!

Here are some of the traditions surrounding this delightful sweet snack...Now here's our recipe to make 24 Fruit Mince Pies.... as a .PDF for you to print out. (It's a bit long to put it here in full - but note IT IS AN EASY RECIPE TO MAKE)

And while the munchkins hoover their way through your pies, here’s how to specially treat Grandad (or ‘significant other’ male) before he goes to sleep on the lounge....

It’s time to give him his Christmas present - that special bottle of old Tawny, just made to go with your mince pies. Tawny (aka Port) strikes just the right note to accompany the fruity flavours of your mince pies - and what better place to source your tawnies than the Barossa Valley!  Here’s a couple of suggestions for you.​​

Now if you’ve got a lazy $2,000 laying around, what better than a bottle of 1916 Centenary Tawny from Seppeltsfield!  Give Grandad a bottle of this and he’ll write everyone else out of the will in favour of you! This 375ml bottle comes in its own special case with Certificate of Authentication.  Can’t afford the 375ml botlle? There’s a 100ml bottle for just $700 - but either way, these tawnies are not for slopping back on the tonsils, so make sure Grandad appreciates their ‘collectors’ heritage.

​If Grandad’s not 100 years old, you can buy his ‘birth year’ collector’s tawny from Seppeltsfield, at various price points, depending on his age.

For something a bit more affordable (and just as yummy) why not get the Old Codger a bottle or two of....well, OLD CODGER...  - from Dutschke Wines of Lyndoch!

Old Codger Fine Old Tawny is a blend of many fortified wines from barrels that have been collecting dust in the Dutschke shed for many years. Winemaker Wayne Dutschke says of it:
It shows great complexity and has much rancio butterscotch like flavours, a result of blending the older fortifieds with the younger fresher components.

Couple it with Dutschke’s Bourbon Barrel Tawny, if the codger likes Tawny AND the taste of Bourbon.  This $40 lip-smacking tawny sniffs of Bourbon because it’s had time on used Bourbon wine barrel wood imported by Dutschke from good ol’ Kentucky in the US of A.  Impress your Old Codger by telling him that the Barossa and Kentucky have a lot in common - Kentucky was the home of the first commercial vineyard in the US and once produced more than 50 percent of the US’ grape harvest and wine yield......

(...note the subtle shifts from caterer to bar manager to entertainment officer? .... Yep, you’ll be very much in Grandad’s good books for the next 12 months!)  If nothing else, it’ll put him to sleep for the afternoon!
Mini steamed Christmas pudding - and bubbly

This is a Christmas pudding recipe that is exceptionally easy to make - and is far tastier than anything mass produced.

Make this now and refrigerate - take it out of the fridge and microwave it after Christmas lunch - make the special Christmas custard to go with it - and you're good to go.  You'll be hailed as the best Christmas chef going around!

Below is the recipe... (to help you, we've put the recipe in a .PDF form which you can download - find it at the bottom).

Serves 12. Preparation time: 40 minutes, plus ‘standing time’ (see below).  Cooking time: 2 hours, steaming.  The puddings can be made up to 3 months in advance (keep them by refrigerating) - or up to a year, if you freeze them.
​
Ingredients: 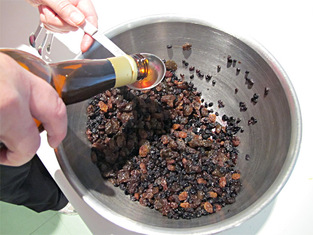 Preparing your mix - remember everyone has to have a stir!
Method:

Combine the raisins, saltanas and currents with sherry in a large bowl.  Mix well. Cover and stand overnight or for several days, stirring occasionally.  This ‘marinates’ the dry mix with the sherry to infuse flavour.

After this, you’re ready to add the rest of the ingredients, but first, prepare the mini moulds.  We used Dariole moulds (which you can get from any reputable kitchenware shop.  Alternatively you can use heat-proof dishes (3/4 cup, or 180 ml capacity).  The ingredients above will fill 12 moulds.

Grease your moulds, and put to one side.

Now prepare the covers which must go over the moulds prior to baking. Cut 12 pieces of baking paper and 12 pieces of aluminium foil each approximately 12 centimetres square.

You’ll also need cooking twine to secure the baking paper and foil to each mould.

Take out the mixture you’ve let stand and add the apple, carrot, almonds, sugar, butter, breadcrumbs, nutmeg, cinnamon, salt and flour - and mix well.  Beat the eggs with the rind and orange juice in a separate bowl, and stir into the mixture.

Divide the mixture among the moulds and cover each mould with a piece of pleated baking paper and cover that with the foil and tie that down with the cooking twine on each mould.

Place the moulds in a shallow frying pan - or an electric frying pan with enough boiling water to come half-way up the sides of the moulds. Cover the pan with a tight-fitting lid and boil for 2 hours.  Check the water every 15/20 minutes and replenish it with boiling water as needed to maintain the water level.

After the 2 hours is up, take the moulds out and leave until they cool down. Take the now-cooked puddings out of the moulds and wrap thoroughly in plastic wrap, them place them in an air-tight container or individual freezer bags.​

You’re done!  You can refrigerate the puddings for up to three months - or you can freeze them for up to a year.  Ideal if you intend having a mid-year Christmas party!  When you want to use your puddings, simply place them in the microwave (in a microwave-safe container) and heat.  To cook 4 puddings at time in the microwave, heat for 3 minutes, for example.